Journalists would travel to Japan from June 17 to 19 to visit related government agencies, think-tank, experts and research institutes. ▲The journalists attended the regular press conference at China’s Mofa Following the visit to China from 13-17 June, the delegation of the Trilateral Journalist Exchange Program moved to Tokyo, Japan.

On 18 June, the TJEP delegation first visited the Japan Institute of International Affairs, one of the most prominent think-tanks on diplomacy and security in Japan. The journalists engaged in a very active discussion regarding the outcomes of the recent Trilateral Summit, issues related to DPRK, and future prospects of trilateral relations.

The delegation also visited the Ministry of Foreign Affairs of Japan for a briefing about the current situation and future prospects of cooperation in Northeast Asia. The topics discussed included the 7th Trilateral Summit, FTA negotiations in the region and future cooperation potentials including infrastructure development in Asia.

The final visit of the day was an interview at the Asahi Shimbun Media Lab. The representative of the Media Lab presented its innovative projects to go beyond conventional newspaper business and the journalists explored how media can cope with the social change and continue developing its business.

On 19 June, the delegation visited Hakuhodo DY Media Partners Institute of Media Environment. They had an insightful discussion about the changes of media environment in recent years and how journalism can adapt to the rapid development of new technologies and social trends.

The final interview of the program was conducted at Japan External Trade Organization. The interview helped the participants deepen their understanding of the recent trends of trilateral economic cooperation and future potentials of business expansion among the three countries.

The journalists would travel to Seoul from 20-22 June. The journalist delegation of the 5th Trilateral Journalist Exchange Program continued their journey in the Republic of Korea from June 20 to 22, 2018.

On June 21, the delegation paid a visit to the Ministry of Foreign Affairs of the ROK. They were briefed on the ROK government's take on the recent developments surrounding the Korean peninsula and asked many questions related to ROK-China, ROK-Japan bilateral relations and trilateral relations as well as the denuclearization of the DPRK.

In the afternoon, the delegation visited SBS, one of the leading media company in the ROK on new media issues. They were briefed on how radio and television programs are made inside SBS, and how SBS is utilizing new forms of news to adapt to the changing media environment. The journalists had an active dialogue, sharing their experiences at their own workplaces.

The 2018 Trilateral Journalist Exchange Program concluded on June 22, 2018 with a seminar co-hosted by the TCS and the Korea Press Foundation. At the Seminar, TCS Deputy Secretary-General HAN Mei delivered congratulatory remarks on the significance of trilateral cooperation and the role of media especially amid the recent developments in Northeast Asia. and journalism experts from the three countries analyzed the responses of the three countries’ media to the recent political developments surrounding the Korean peninsula. The journalist delegation also participated in the seminar, engaged in a lively discussion with the experts regarding the roles and responsibilities of media and shared their perspectives on how to further develop cooperation to bring peace and co-prosperity in the region. ▲Group Photo with Secretary-General LEE Jong-heon of the TCS ▲Visit to the Ministry of Foreign Affairs of the ROK 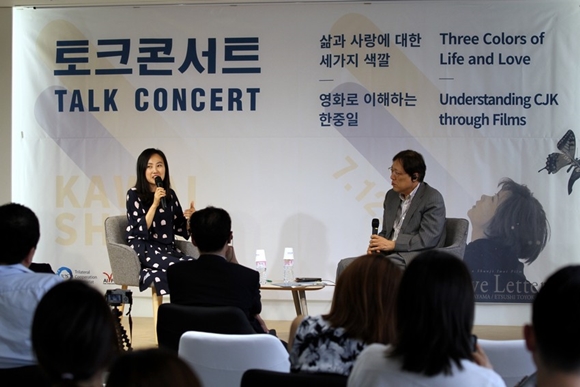