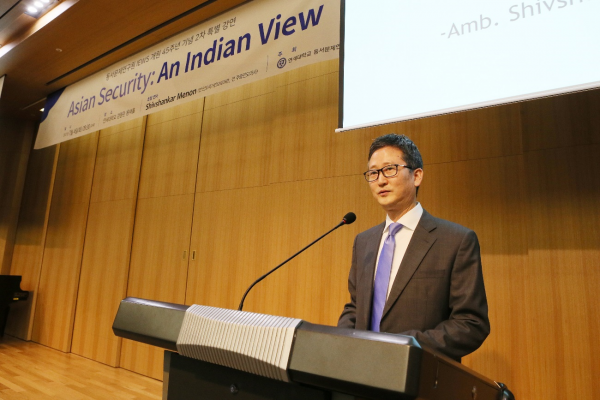 1. What are the distinguishing features of your organization? ​

​The Institute of East and West Studies, established in 1972, is a research institute affiliated with Yonsei University. It has been conducting comprehensive research, encompassing the fields of politics, economics, social studies, and culture. As any academic institute that first introduced interdisciplinary research cooperation, the Institute of East and West Studies has been committed to promoting academic progress by offering a research platform for in-depth and multi-dimensional analysis of both domestic and international changes, while suggesting policy alternatives. In commemoration of its 45th anniversary this year, the institute seeks to propose a new paradigm for the age of the new normal, an age of instability due to low growth, limitless competition, and changes in the global geopolitical dynamics.

The Institute of East and West Studies has been continuously striving to develop more specialized research departments under the supervision of a director and an associate director, to carry out higher-quality academic research. The institute runs 12 research centers and one program in terms of regional studies, and operates nine research centers and two programs in terms of research subjects. These research centers organize stand-alone research committees by program and engage in a variety of research activities, such as conducting joint research, holding seminars, international conferences or forums, and publishing research works. The Leadership Center and Yonsei Jean-Monnet Center have become the representative research centers of the Institute of East and West Studies. The Leadership Center, established in October 2001, is the first Korean research center dedicated to research and education on leadership, and has been providing an array of programs since its inception to university students to develop and strengthen their leadership skills. Key programs that the center offers include a leadership education program, a student organization support program operated by voluntary student participants, and a leadership mentoring program that helps students participate in volunteer activities. The Yonsei Jean-Monnet center, established in 2009, has been committed to supporting academic research projects, operating and supporting educational programs, running exchange student and internship programs, and promoting academic exchange among scholars.

The Institute publishes SSCI and KCI listed journals four times a year. The Global Economic Review, an English language journal of the institute, has been published by Routledge and was listed in SSCI in 2009. The institute also publishes the Korean and English language journal, East and West Studies, which was listed on the National Research Foundation of Korea’s journal list in December 2011.

Since its establishment, the Institute of East and West Studies has promoted academic and informational exchanges, and hosted international conferences with foreign research institutes. The institute has cooperative relationships with as many as 70 international research institutes and academic organizations in 19 countries, and has continuously sought to expand these relationships. The Korea-China-Japan Workshop, organized by the ‘cooperative regional studies’ program, is the most representative program with regard to the trilateral cooperation among the three countries. In an effort to strengthen students’ global competitiveness, Yonsei University, Keio University, and Fudan University jointly provide lectures; hold workshops, academic seminars on regional studies, and global symposiums; and run graduate student exchange programs on a regular basis. Through such cooperative activities, the professors, scholars, and students of the three schools have been actively conducting research with a focus on Northeast Asian studies.

This year, in celebration of its 45th anniversary, the Institute planned a series of four forums, some of which are already underway. The forums cover subjects related to cooperation among Northeast Asian countries in terms of economic, political, social, and cultural aspects. A forum on the status and outlook of social and cultural exchanges in Northeast Asia took place last June, where research works on the Korean wave and Cool Japan, and comparative analysis of media industries in China, Japan, and the ROK were presented. In November, the institute will host a seminar on case studies and the outlook of Northeast Asia studies. This seminar will analyze the history of studies on China, Japan and the ROK and forecast the future direction of regional studies. The research works presented in these four forums are subsequently being published.

I believe that China, Japan and the ROK need to put more effort than before, as they need to deal with the world powers amid the serious security threats to Northeast Asia. They should also avoid conflicts in the region and promote peace and cooperation. More importantly, they need to create concrete cooperation strategies from multiple aspects, including social issues, politics, culture, and economics.

Regarding academic research for the development of trilateral cooperation, I suggest a thorough survey of case studies on the cooperation among the three countries. China, Japan and the ROK have been in acute tension over historical issues, territorial controversies, and North Korean nuclear problems. However, these countries also tried to promote cooperative relationships among them when faced with transnational crises such as the financial crisis of 1997, the great East Japan earthquake on March 11, 2011, or the SARS outbreak in China. Unfortunately, limited research has attempted to view the situation through a detailed and analytical approach. Therefore, it would be advisable to explore more cases of the three nations having built continuous cooperative relationships, in the context of existing research on security, politics, and diplomacy in Northeast Asia.

This calls for a private-level framework to promote academic exchanges and collaboration among research institutes and scholars in China, Japan and the ROK. Additionally, I hope that through establishing institutionalized measures, more robust and long-term regional studies on Northeast Asia could be continued. I believe the Institute of East and West Studies could become an unprecedented international organization if the Trilateral Cooperation Secretariat would seek ways to foster trilateral cooperation and provide full support to related research activities.